How To Talk About Sexual Abuse Safety

Did you know that most children never report sexual abuse while it’s happening?

If you think that’s crazy, think about this: Most sexual abusers are someone known and trusted by your family, not a stranger.

The combination of a trusted family member or friend creating feelings of emotional obligation or fear can put anyone in a tough corner, much less children who haven’t been explicitly taught that it’s a-ok to discuss situations that have made them feel uncomfortable or unsafe.

Eight out of ten children who are sexually abused already know their abuser. That’s why a parent’s most important step in sexual abuse prevention is to talk to your kids about it early and often.

You may never be able to completely prevent your child from encountering harm. But when it comes to sexual abuse, you can do a lot to reduce your child’s vulnerability and to increase the chance that they’ll tell you if something does happen.

The idea of having this difficult conversation might seem even scarier than finally breaking down the “birds and the bees”. To make it easier, we’ve gathered tips on how to best approach the conversation of sexual abuse safety, so it’s easier to start and repeat (remember: early and often!) 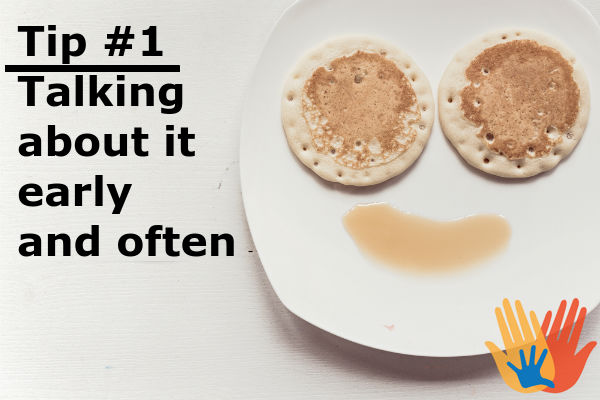 1. Focus on safety, instead of framing the conversation as something taboo or “dirty”.
Even young children are adept at picking up when something is wrong. Instead of starting with scare-facts, speak from a calm, loving and casual frame of mind.

Talk about sexual abuse prevention as you would any other safety matter, such as not answering the door for strangers, wearing your seatbelt, or what to do if they get lost. As a parent, you’re confident that your child knows not to touch the hot stove because it’s been repeated many times. Approach sexual abuse safety the same way, and you child will be just as prepared to avoid these dangers as well.

When Asked Why They Didn’t Tell:
“I was too young to realize it was wrong.”
“I didn’t want my parents to know.”
“I was ashamed.”
“I thought I would get in trouble.”
“I thought no one would believe me.”
“He told me he would hurt my family.”

The key word is “safety” and the conversation can come up in easy ways. For example, giving your child a bath is a good time to learn about their private areas. Let your child know that these body parts are their own and even though mom and dad have to occasionally clean them up, no one else should ever look or touch them there.

3. Teach them the actual names of their private parts.
Experts advocate that parents teach their children proper body names, such as “vagina” and “penis”, from an early age, right along with other body parts such as fingers, ears and toes.

Giving private parts “cutesy” names may make a child feel shame when discussing them. However, using the correct words early on makes discussing sexual abuse safety easier if you lay the groundwork that there’s no need to be embarrassed.

Using the correct words for body parts allows children to express themselves clearly if something is wrong.

In one case, a child told her parent that her stomach was hurting. When they took her to the doctor, he informed them that her vagina showed signs of rape. Their little daughter had been trying to tell them what was happening, but she just didn’t know what to call her vagina. So she said stomach instead.

4. Talk to them about what is ok.
Depending on the age of your child, they might still need parents or caregivers to keep their bottoms clean, safe and healthy.

Talk to your child about why this activity is ok, so they can understand when you or a trusted caregiver might need to see their private parts. Giving examples of why someone is seeing or touching their privates when it happens, like a bath or doctor’s visit, can help them recognize when someone shouldn’t be.

5. Teach them not to be ashamed.
Understanding that private parts are special is an important step in healthy development. Private parts can feel “tingly and nice” even at an early age, and it’s not uncommon to find kids exploring these sensations.

Ask if they know what it feels like when you are touching to keep them clean, safe and healthy, and explain that while their privates can feel tingly and nice, those places are just for them. 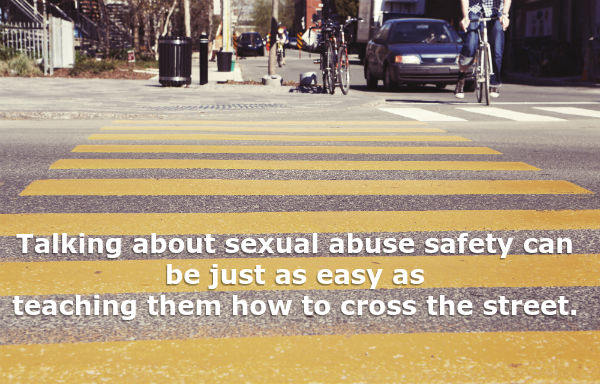 6. Teach them (and respect) their right to control their bodies.
Adults normally have absolute authority over everything, teaching children that they have to say and do what they’re told. But that creates a problem when children are indirectly taught not to speak up if they feel hurt or scared because of an adult’s actions.

Instead, empower your child that their body is theirs and they have permission to say “no” to an adult’s request to touch if it makes them uncomfortable.

For example, when you’re at a social event, consider not making your child kiss or hug anyone they don’t want to. If an adult tries to make them, it’s your chance to support your child’s choice.

Let your child know they can give a kiss, hug, handshake, or nothing to people they see and it’s entirely up to them.

One way is to tell the child before social events that if they ever feel uncomfortable with someone – even if nothing has happened – they can leave the room and you. When a child learns that their sense of safety is more important than the need to be “polite”, they’re more confident protecting themselves and speaking up whether or not you’re in the next room.

8. Explain that because you love them, they can share their secrets.
Many abusers tell their child victims that what happened was a secret and to not tell anyone, especially their parents. So it’s important to teach them early on that secrets are still kept secret if they tell their mom or dad.

Additionally, they should understand anyone who wants them to keep secrets from their parents shouldn’t be trusted and they should definitely tell their parents about it, even if the secret was a present or something nice.

But Here’s the Most Important Thing:
Every family has individual preferences when approaching talks about private parts. However, you choose to talk to your child about sexual abuse safety, keep the conversation ongoing, open and casual.

Just like traffic or fire safety, you wouldn’t tell your child something life-saving only once! Instead, you tell them again and again, and even quiz them to make sure they will always be safe.

It’s the same deal for sexual abuse – start having the conversation at an early age, and it becomes even easier as they grow older.

While nothing can keep your child 100% safe, if you keep an open, casual dialogue with your child, keep an eye out for signs, and pay attention to how your child responds to people, you’ve significantly reduced the risk of someone sexually abusing your child.