Since the mid-nineties, scientists have been studying something that might be in every household. Children exposed to it suffer from a dramatically increased risk for seven out of ten leading causes of death.

It can affect a child’s brain development, immune system, hormonal system and even the transcription of a child’s DNA. These effects occur both in both the early stages of life and into adulthood — with sufferers experiencing up to a 20-year difference in life expectancy.

It’s not lead. Not asbestos. Not even growth hormones in our food. 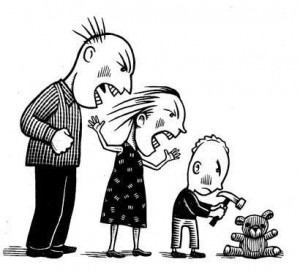 The flight or fight response that is programmed into our bodies to help us survive — increased adrenaline, cortisol, pounding hearts and accelerated breathing — is an adaptive, life-saving mechanism.

However, when children have to endure traumatic experiences repeatedly or live day to day in high-stress environments, those same life-saving chemicals can do some serious long-term damage.

What do they mean by “adversity”?

As a society, we’re proud of our ability to overcome hardships. Our culture rewards those who accept that “what doesn’t kill us, makes us stronger” and parents are often pressured to use harsh discipline by such folksy wisdom as “spare the rod, spoil the child”.

But there’s a difference between character-building adversity — the kind a child has the chance to overcome — and the trauma of living in an unhealthy environment, day in, day out, with no hope of escape.

The Factors That Reduce Life Span

So what are these factors that correlate so drastically with heart disease, lung cancer, depression, hepatitis and early death? A study by Dr. Vince Felitti at Kaiser and Dr. Bob Anda at the CDC identified the following as considerably damaging to a developing child:

That’s a pretty comprehensive list. So much so, that research has revealed 67% of us have experienced at least one of these factors that could contribute to a lifetime of health issues. 12% of the population has experienced four or more, directly correlating with a 20-year difference in their life expectancy.

What about the idea that those who grow up with a hard childhood are predisposed by nature to smoke, drink or abuse substances, leading to these diseases? That it’s really partially a matter of lifestyle choice?

That’s been debunked, too.

We know that exposure to adversity does inhibit the prefrontal cortex development, the area of our brains that are necessary for impulse control and directly related to addictive behaviors. However, it turns out that even if someone who grew up in adverse conditions doesn’t engage in unhealthy behavior, they’re still at greater risk of heart disease and cancer!

Really? That’s right. Children are especially sensitive to repeated exposure to high-stress situations. One doctor has gone so far as to say that

The damage to brain and body development that a young child experiences, when exposed to high levels of stress hormones over a long period, is reversable. With the right coordination of care, counseling, and intervention, we have the power to interrupt the progression of the negative effects on a child’s health.
In the words of Dr. Nadine Burke Harris:

“This is treatable. This is beatable. The single most important thing that we need today is the courage to look this problem in the face and say, this is real and this is all of us. I believe that we are the movement.”

Want to find out more? Watch the video below where Dr. Harris talks about her Bay Area clinic, the experiences that led her to researching adversity, and the strides she’s making to ensure this epidemic becomes something of the past.