Keep your kids safe with this summer camp safety checklist

Summer camp is a perfect place for sex abusers to groom and abuse kids, which means it is time to think summer camp safety. Wherever there are kids there is the potential that a predator will have found his or her way into the camp and positioned themselves in a role that gives them one on one access to your child. While there are no statistics regarding the frequency of child sexual assault at summer camps there have been numerous high profile molestations that should get parents to think about summer camp safety. 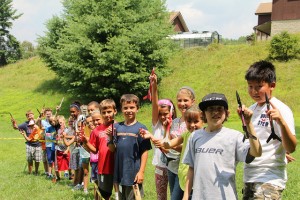 In a perfect world, summer camp would be a time of learning, play, and carefree abandon for America’s children. In reality, however, children are as vulnerable to sexual predation at camp as they are anywhere else–perhaps more so, because their parents aren’t there to supervise them. As a parent, use this summer camp safety checklist in order to minimize the danger your children will be put in if they attend summer camp this year.

Teach your child about anatomy.

It’s tempting, as a parent, to use euphemisms when describing body parts and functions to your child. But if your child should ever be molested, this “soft” language can actually hurt the investigation–and your child’s credibility as a victim. It behooves you as a parent to teach your child the proper names for anus, scrotum, vagina, and penis. Tell your child that these are the “private” parts of his or her body, and that no one should ever touch them unless that person is a doctor or an emergency medical technician.

Tell your child that secrets are not OK.

One of the most common tactics molesters use is to make your child a co-conspirator in their own abuse. Learn how predators groom children. Pedophiles swear children to secrecy, making them promise never to tell another adult, often threatening them with bodily harm or telling them that they’ll “get in trouble” if they tell. Teach your child that secrets with no “expiration date”–which are to be kept indefinitely–are not the right kind of secrets.

Many camps don’t allow children to have cell phones. If your child is abused, or even if some adult makes them feel uncomfortable or afraid, then they need to report it to someone immediately. Tell your child to tell a trustworthy adult about the abuse, and to keep telling someone until the authorities are called. Molesters commonly convince children that they will get in trouble if they tell someone about the abuse, but teach your child that this is a lie–they will never get in trouble for confessing no matter what.

You, as a parent, have an obligation to do your homework. You need to make sure the camp you’re sending your child to lives up to its brochures. You need to know:

Teach yourself to recognize suspicious adults.

An overwhelming majority of sexual predators (90%) are male, according to the Centers of Disease Control in 2005. Worse yet, the victim knows the perpetrator personally in over 71% of reported molestation cases. As unpleasant as it is to admit, pedophiles aren’t nameless strangers wearing hoodies and sitting in pickup trucks, waiting for our children to walk by. They’re friends of the family, coaches, teachers, religious leaders, even family members.

Be suspicious of any adult that takes an inordinate interest in your child. Familiarize yourself with predatory grooming behavior and be watchful for signs of it in camp counselors and administrators. And not just adults: roughly 30% of all sexual abuse against children is perpetrated by other children. Be aware that even the adolescents at camp with your child may not be trustworthy. That’s why it’s important for you to find out if your child will ever be alone with older children.

Look out for red flags.

The signs of sexual abuse are many and telling. In younger children, these signs include but are not limited to:

In older children, the signs of sexual abuse may include:

Know what to do if your child is molested.

Teaching your child some basic things (the proper names for body parts, for example) and by properly vetting the camps you’re considering may save your child a world of grief. It’s your duty as a parent to properly ensure that your child is safe when they’re away at summer camp and making happy memories, not sad ones. Child molesters are good at manipulating children, but if you forewarn them about predatory behavior and ensure the camp’s policies are up to snuff, you’ll ensure that summer camp remains a magical, cherished time for your children and your family as a whole.