Kevin Braney was a victim of clergy sexual abuse at the age of 15. The Diocese of Syracuse refuses to compensate Braney for the harm caused even though the Vatican found Braney’s accusations and abuse “credible”. The story of his abusers can be read about here.

Kevin Braney started to experience pain in the summer of 2013. The sharp sensations radiated from his groin and were unexplained by visits to medical professionals.

Well-like, successful and married, Kevin was too busy to pay attention to the discomfort. At 41, the All American lacrosse player and Brown alumni was a principal at a public Colorado high school while completing his doctorate program.

So Kevin did what he’d always done: charge full steam ahead.

Looking back, Kevin admits his constant striving and hard work was most likely a coping mechanism – one that could be traced back to his time on the lacrosse field in his mid-teens.

His dedication to playing hadn’t seemed abnormal at the time, but the fervor with which Kevin dedicated himself continued on through adulthood; the busier he kept himself, the less likely his mind was to wander.

Why the pain began at that time, or why the sensation began as physical, Kevin is still unsure, but that summer Kevin couldn’t outpace what was happening to him.

Panic attacks began to accompany the pains that were once isolated, and then he got his first flash: A window. Later that window would reappear, open and letting in a warm fall breeze, but initially it was only the crystal clear image, “like a photograph” he says.

“At first I thought I was crazy,” Kevin said, “I had no idea what was happening.”

The localized pains, panic attacks, and now this image of a window Kevin swore he’d never seen, gave him the sense that perhaps he’d finally taken on too much, and by November Kevin decided to take three weeks off work.

But instead of helping, the time off removed all Kevin’s distractions and soon he was flooded with memories of a molestation that had occurred almost two decades prior.

The image of the window was followed by others. For Kevin, his memories were crystal clear, with detailed color and sound. But the images that came were still out of order and context, he didn’t yet understand what he was experiencing.

Kevin felt an incredible amount of confusion and shame, admitting it was almost easier to accept that he was losing his mind than the possibility that what he was remembering could be real, much less that his brain could have tricked him into repressing memories of such a traumatic event for so long.

People tend to assume that strong emotional experiences create strong emotional memories, but the human memory works in funny ways; ask any crime victim or survivor of a natural disaster about their memories of the traumatic event and you’ll find that they often have a distorted sense of the duration and order of events.

Time seems to speed up or slow down and memory jumps around or focuses in on small details instead of the big picture. The brain does what it needs to in order to survive and function long enough to get us safely through trauma.

When asked how he feels about the term “repressed memories,” Kevin said it’s not completely accurate.

“It’s not like these were something I had pushed down. I didn’t have access to them at all” he explained.

Three months after the initial physical discomfort began, Kevin’s situation took a turn for the worse. The memories were coming to him more frequently, vivid flashes that were so real they made him feel “transported” and ungrounded.

In what he admits now was the wrong decision, Kevin kept the resurgence of memories mostly to himself. The worst of his memories would occur at night and induce a kind of a terror state that caused him to seek comfort by laying on the bathroom floor.

Struggling With a Lack of Support

Kevin’s then-wife wasn’t able to handle his memories or extend empathy, and the estrangement between them made his confusing situation even more difficult.

Seeking the assistance of a therapist, Kevin began blindly groping to fit together pieces of the puzzle inside his mind he hadn’t known existed several months prior. By Christmas, Kevin began to truly accept that he had endured something awful as a teenager. His resolve to keep quiet finally gave way to the immense pressure of feeling tricked by his own memory and isolated without support. 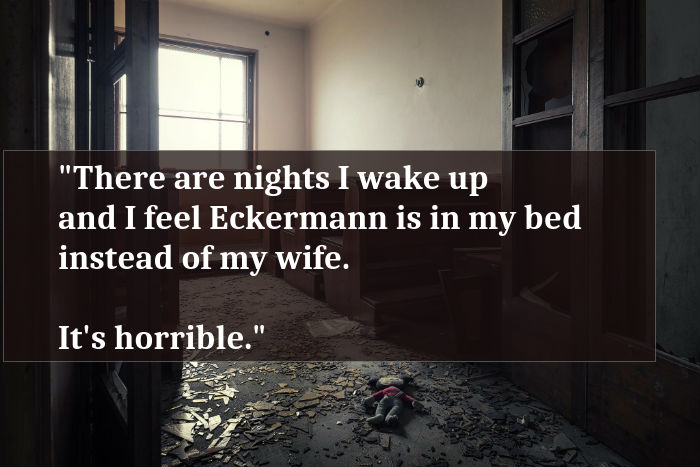 Kevin called an uncle in Florida with whom close, and without describing why, arranged a visit so that he could finally open up. But the night before his scheduled flight, the feelings of shame became so overwhelming he was forced to seek immediate assistance for symptoms related to the stress of coping with these memories while alone.

Speaking to his parents and siblings about the sexual abuse that was becoming easier to recollect every day, allowed Kevin to receive the support he so badly needed. The beginning of acceptance of what he’d endured, and what his mind and memories were attempting to tell him, made Kevin realize it was ok, even necessary, to ask for help.

“It’s a process, not a straight line,” Kevin said of beginning to cope with recovering memories of his abuse, “You have to go through it, no matter how difficult it seems.”

Trying to Start Over

Throughout the coming months Kevin both pressured the church which led to one of his abusers, Monsignor Charles Eckermann being removed from ministry (the other had deceased) and continued to work with his therapist on the process of healing.

When asked how long the process of continuing to recover memories will take, Kevin said his therapist promised the bulk of their work will be done within five years, but that his own struggle with them may never be complete.

The prospect of unhappy memories popping up as Kevin rebuilds his life is upsetting. Engaged to a woman Kevin lovingly calls his support system, and father of a baby boy, he’s ready for the memories to stop.

“They feel like an intrusion. There are nights I wake up, and I feel Eckermann is in my bed, instead of my wife. It’s horrible.”

Armed with tools from his therapist, Kevin now uses a protocol similar to that used by sufferers of PTSD when he finds the memories overtaking his consciousness. With the comfort and help of his wife, Kevin has practiced acknowledging that the memory he’s having happened during the past and recognizing that he is in the present.

Learning to stay anchored in the present has been incredibly helpful, says Kevin.

While his partner provides an important feeling of safety and presence, he still experiences periods of detachment when memories are evoked. He fears these moments are difficult to understand for those who care about him, but finds the best way to cope is retreating internally and discussing the feelings afterward.

Kevin finds the difficulties of coping with recovered memories for the foreseeable future can feel overwhelming, but explains that there are some obvious benefits to putting forth the effort to continuing his treatment for trauma.

“I no longer have panic attacks” explains Kevin. He also says the experience has taught him to tune in and attend to how he’s feeling, instead of steamrolling through.

The process of taking care of himself has left him feeling healthier, both physically, emotionally, and mentally – A new way of both living and working through the unknown.

And while the traumatic events he experienced, and the aftermath on his psyche that Kevin will continue to experience, are difficult to accept, he has found other ways to make life easier.

Healing Through Helping Others

Despite that Kevin had nothing to gain from coming out to speak about his story (statute of limitations for his case had already passed) he asserts that doing so has brought nothing but good into his life: support, openness, and opportunities to help others heal. He’s also found a work/ life balance that he considers much healthier than the pace he was working at before.

An activist for abused children, his free time is given to helping others who have endured similar trauma in many ways: a member of the State Suicide Prevention Commission, he also speaks with schools about sexual abuse prevention and tries to raise awareness for the best methods of support for those students who need it.

When asked if he had any words for parents of children who had experienced abuse, or adults recovering their own memories, Kevin urges them to ask for help. That the compassion, caring, and genuine support he has received from others is what made it possible for him to enjoy life as he does now.

Kevin Braney is one of many New York sexual abuse victims unable to sue their abuser or the institution that enabled the abuser’s crimes. For that reason, Kevin support the New York Child Victim’s Act.