In “A Rape On Campus,” a woman using the pseudonym “Jackie” gives gory details of the night she was raped by seven fraternity members at the University of West Virginia.

Jackie, who was 18 at the time, says she was asked out by “Drew” (a pseudonym used in the article), an attractive junior she met while they were both working as lifeguards at the university pool. Drew invited her to dinner and a “date function” at his fraternity, Phi Kappa Psi. During the party, Drew asks Jackie if she wants to go upstairs. She follows him into a pitch-black room and screams when she suddenly realizes they’re not alone (heads up, some graphic details):

“Shut up,” [Jackie] heard a man’s voice say as a body barreled into her, tripping her backward and sending them both crashing through a low glass table. There was a heavy person on top of her, spreading open her thighs, and another person kneeling on her hair, hands pinning down her arms, sharp shards digging into her back, and excited male voices rising all around her. When yet another hand clamped over her mouth, Jackie bit it, and the hand became a fist that punched her in the face. The men surrounding her began to laugh. For a hopeful moment Jackie wondered if this wasn’t some collegiate prank. Perhaps at any second someone would flick on the lights and they’d return to the party.

“Grab its motherfucking leg,” she heard a voice say. And that’s when Jackie knew she was going to be raped.

The graphic interview attracted a storm of attention: 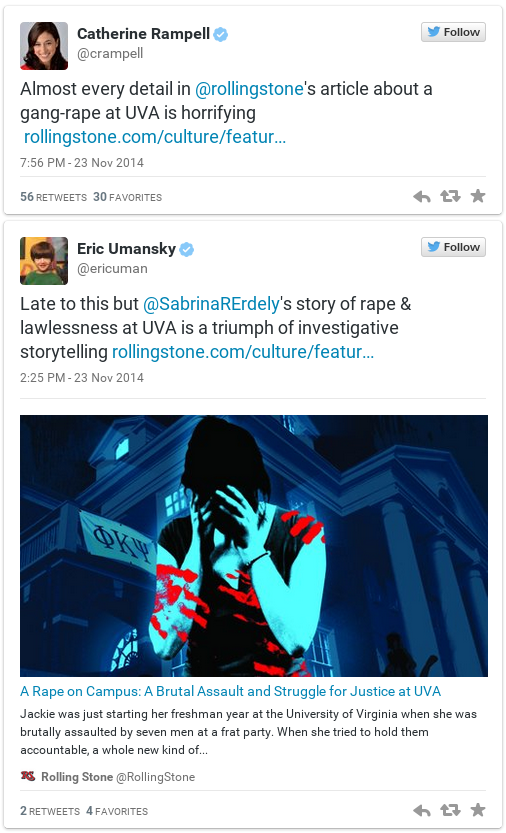 Feeling the heat of media pressure, UVA’s president, Teresa Sullivan, sent an email to the student body, going so far as to say:

“Beginning immediately, I am suspending all fraternal organizations and associated social activities until January 9th, ahead of the beginning of our spring semester.”

Many survivors of sexual assault at UVA were also inspired by the Rolling Stone story to come forward with their stories, and their responses were published on the website under the title, “Rape at UVA: Readers Say Jackie Wasn’t Alone.”

While the article focused on Jackie’s account of her assault, reporter Sabrina Rubin Erdely remarked on the obstacles survivors come up against if they decide to report a rape at UVA. The article also looks at the culture of sexism on campus, and cites one of the university’s popular fraternity fight songs as an example:

But rather than discussing the obvious epidemic of assaults against women at universities—and the campus culture that makes it harder for victims to come forward—commentators on the internet started to question the validity of Jackie’s story (emphasis ours):

“If the frat brothers were absolute sociopaths to do this to Jackie, her friends were almost cartoonishly evil — casually dismissing her battered and bloodied state and urging her not to go to the hospital. … I’ll be following any and all developments in this case, and am eager to see this particular story either confirmed as true or exposed as a hoax.”

Richard Bradley, in his blog Shots In The Dark, very closely examined the fine details of Jackie’s story (heads-up, some graphic details; emphasis ours):

“So then we have a scene that boggles the mind … .
A young woman is led into a ‘pitch-black’ room. She is shoved by a man, who falls on her; they crash through a glass table and she lands in shards of glass. She bites his hand; he punches her; the men laugh. (Really? A man punches a woman and people laugh?) With the smell of marijuana (not usually known as a violence-inducing drug) hovering over the room, he and six more men rape her …”

As media pundits continued to pick apart the article, it came to light that the magazine’s journalist had failed to find secondary sources, contact the friends Jackie stated had seen her immediately after the rape, or attempt to find the identity of the rapist.

Instead of taking responsibility for their lack of investigation…

Rolling Stone Magazine turned on Jackie. On December 5th, Rolling Stone managing editor Will Dana started to backpedal, stating the magazine had found “discrepancies,” without stating what those discrepancies were:

“We reached out to both the local branch and the national leadership of the fraternity where Jackie said she was attacked. They responded that they couldn’t confirm or deny her story but had concerns about the evidence.

In the face of new information, there now appear to be discrepancies in Jackie’s account, and we have come to the conclusion that our trust in her was misplaced.“

The editor’s statement was removed the phrase “and we have come to the conclusion that our trust in her was misplaced,” and was revised to say:

We published the article with the firm belief that it was accurate. Given all of these reports, however, we have come to the conclusion that we were mistaken in honoring Jackie’s request to not contact the alleged assaulters to get their account. In trying to be sensitive to the unfair shame and humiliation many women feel after a sexual assault, we made a judgment – the kind of judgment reporters and editors make every day. We should have not made this agreement with Jackie and we should have worked harder to convince her that the truth would have been better served by getting the other side of the story. These mistakes are on Rolling Stone, not on Jackie. We apologize to anyone who was affected by the story and we will continue to investigate the events of that evening.

Publicly casting doubt on Jackie’s story will have consequences for all sexual abuse survivors.

Adult victims of sexual assault fear coming forward for many reasons, including social repercussions and not being believed. However, the culture of doubting victims doesn’t stop at adults. To tell of sexual abuse is equally difficult for children, many of which never come forward:

According to several sources, including Stanford, the FBI, and the Leadership Council, thorough studies put the statistics at 2-10% for all child and adolescent reports of sexual abuse — which is just about the same percentage of unfounded reports for other felonies.

Way more likely than not, both adults and children who report they were sexually assaulted are telling the truth. To “misplace trust” implies that Jackie’s story was not to be trusted, that her story is false, when there’s no resolute evidence to back that up. 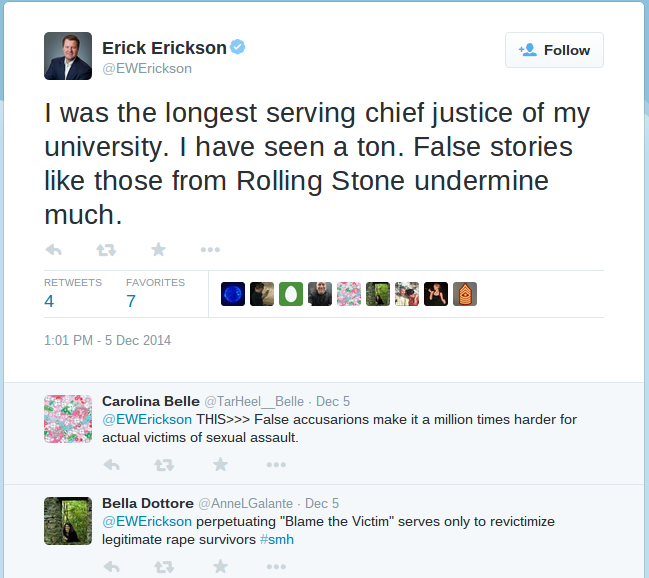 This is bigger than Jackie’s story — this is about how society treats victims of sexual assault.

No one but Jackie and her rapists know every detail of what happened. But the number of people who have jumped to call the story false shows that:

At Keep Kids Safe, we are concerned that this alleged-irresponsible reporting will have a chilling effect on newspapers and media who have the courage to tell the stories of sex abuse victims. If the after effects of this article stops one newspaper from reporting suspected abuse, then this is a sad day for our society.

But, the doubt expressed by their editor perpetuates a culture where we do not believe victims, and make it harder for survivors of any age to step forward.

When hearing of sexual abuse and assault, we often become concerned with the need to hear both sides, forgetting the damage that casting doubt on a survivors credibility does to a victim and those who try to share their stories.